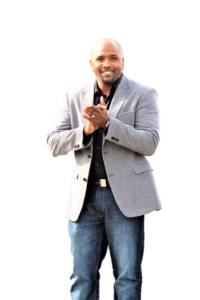 For the past three years, Jarrod has dedicated his time to working with those experiencing homelessness, as well as those who participate in prison reentry programs – trying to transition back into society. Jarrod says he’s passionate about helping the “underdog”. He fights for those who’ve been stripped of every ounce of hope. Jarrod’s fervency was birthed from some of his own tragic experiences. He recalls his family being severely affected by drugs and homelessness. As a young man, Jarrod made some decisions that landed him eight years in prison. Although he suffered many difficulties and disappointments, Jarrod knew that God had much more in store for his life; his mess would be transformed into a miracle!

Upon his 2012 reentry into society, Jarrod found it difficult for employers to trust the man he had developed into rather than judge him based on his past. Even still, he hit the ground running to encourage those who shared stories similar to his own. He lives to encourage those in despair and remind them that their pasts do not define their futures. More than that, he “partners” with and assures them that he will long jump the hurdles of life with them. Through a position in his hometown of Cleveland, Tennessee, Jarrod made a connection that led him to Crossroads. He sees that unexpected connection as being part of his “God story.”

When he is not encouraging, igniting and equipping others with “tools” for self-sufficiency, he is investing in his family. Jarrod says his wife, Nicole, and their four children are excited to be at the place where God lead them.